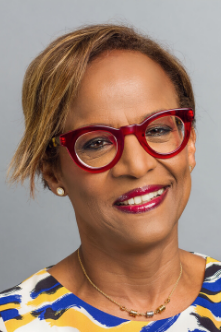 Therese Turner-Jones has been the IDB’s country representative for Jamaica since 2013. In 2017 her portfolio was expanded when she was promoted to general manager of IDB’s Country Department Caribbean Group (CCB).  Her purview spans IDB operations in Barbados, Guyana, Jamaica, Suriname, Trinidad and Tobago and her home country, the Bahamas.

A trained economist, Mrs. Turner-Jones has over 25 years’ experience in macroeconomics and economic development, with special emphasis on the Caribbean. She served the International Monetary Fund (IMF) in senior posts for over 20 years. She was a former Deputy Division Chief for the IMF’s Caribbean II Division, Western Hemisphere Department and a former advisor to the Executive Director for Canada, Ireland, and the Caribbean.

A member of the International Women’s Forum, Mrs. Turner Jones is passionate about financial inclusion, gender equity, children, vulnerable communities and the environment.

She is an ardent champion of the IDB’s vision to improve lives in the Caribbean. A fitness and tennis buff, she is married to Dennis Jones a former IMF economist. They are the proud parents of three daughters; Bronwyn Huggins, Eleanor and Rhian Jones.